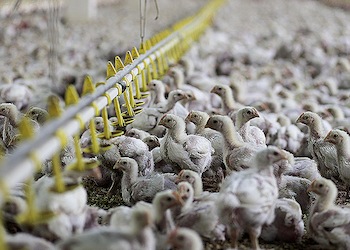 A Pew Environment Group report tallied the various environmental impacts of the growth and concentration of poultry production in the United States.
The report, combined with other recent research, moves concerns about concentrated animal feeding operations (CAFOs) from hog and cattle farms to poultry, but the primary issue is essentially the same: manure and its effect on water and soil. 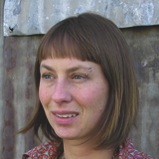 There is essentially no federal law governing pollution from CAFOs. State law, in the meantime, is piecemeal and highly variable. The federal EPA has tried to regulate water pollution from CAFOs under the Clean Water Act for many years, pretty unsuccessfully. CAFOs are industrial operations, like cement factories or chemical plants, but in many cases they are regulated more like they are still 100-chicken egg-laying operations. The farm lobby has continued to use the phrase "family farm" to describe these operations, but while many of them are in fact owned by a family, few are the sorts of small operations that term might conjure up.

Don't blame the farmers: Animal agriculture nowadays is a big money, capital-intensive business, and farmers who want to stay in the game are encouraged by U.S. economic policy to get big and cut costs. In a way, I see farmers as victims of an economic system that rewards size more than stewardship.

Think beyond organic: CAFOs feed upward of 90 percent of the U.S. population. They are here and they are not going away, so we need both short-term solutions to their environmental impacts (such as rules and regulations that discourage pollution), and long-term policy discussions about how best to feed our country and the world. 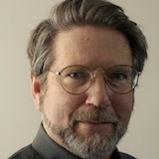 Like so much American production, the poultry industry has stagnated lately, and a couple of poultry-processing companies have gone under or been merged. Some have been quick to blame that retrenchment on government regulation, but the shakeout appears more likely to have been the result of other economic factors, such as the price of fuel, or an overall softening of demand during the recession. Despite all that, the environmental footprint in regions thick with "chicken houses" is still substantial.

Foul health: Farmland in the Maryland region, where there once was a thriving fresh produce and canning industry, is now devoted largely to growing just a few crops — particularly corn and soybeans — raised mainly as food for chickens. Little attention is given to either the inherent inefficiency, nutrition-wise, of a diet so focused on meat consumption or the health implications of consuming poultry treated with arsenic and hormones.

I'll be watching ... to see if federal and state governments tighten regulation of poultry production, as proposed, to address pollution from manure. There’s a frustrating lack of clear information on how much manure is generated by the industry and what happens to it, and that ambiguity has helped to blur the debate about whether the industry is doing enough voluntarily to control its pollution problems.